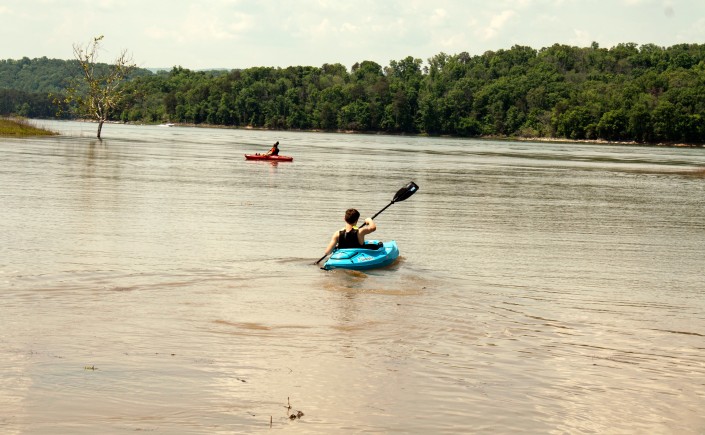 I live on a lake managed by dams; water rises during the summer and lowers in the winter. We are near what the locals call full pool, and little pockets of water have formed as the lake slowly rises. In my quiet time last week I watched ducks swim in the small pool behind our house. Around and around they went going nowhere. I recalled a parable I heard during a Beth Moore study. On one of her walks she noticed ducks swimming in a puddle. She was amazed that the creatures chose the puddle instead of the lake that was just over the hill. She compared it to people who have chosen small lives when they could have bigger ones.

Last week we purchased kayaks. My teenagers asked me back at the beginning of the year and my first reaction was NO! My almost grown children have out grown their backyard and the lake is calling for them. They want to explore their world and I want them to stay in the puddle.

I have expanded my world and have taken risk in the past few years. I am doing things I would have never dreamed of. The freedom I feel on this side of my comfort zone is exhilarating. I want my children to experience their freedom too. If they want to test the waters than who am I to stop them? Am I to be their prison guard? Or am I to be their inspiration?

We launched the kayaks last weekend. I watched my boys from the shoreline of the cove where they were learning how to navigate the craft. I felt the flutter of fear in the pit of my stomach.. The feeling began to grow and it spread like a disease and somewhere along the way it linked up with anger. I wanted to turn that anger on my husband who stood with me but before I could, my youngest boy looked up with the biggest smile after he turned his kayak successfully. If I had my camera I would have called the picture “pure joy” or maybe “freedom”. That smile had put out the fire of anger and fear shrunk back into the pit of my stomach. I watched them as they expanded their boundaries. They held themselves differently as they paddled away from me and out from under my control. With my fear subdued another feeling began to form. It was longing. I longed to be out there too experiencing that type of freedom.

“Can I try?” I asked. My son did not hesitate and allowed me to borrow his gift. I clumsily situated myself and accepted the paddle. As my husband pushed me into the water, the kayak rocked and swayed. It took all my concentration to learn how to maneuver the boat and I did not realize I had traveled to the center of the cove. I saw my husband and son standing on shore. I look in the opposite direction towards the mouth of the lake. I had a choice.

I paddled to the shore, giving the kayak back to my son. Once both boys were back in the water they asked if they could go out on the lake. With a promise of staying along the edge, I gave them my blessing. I watched them until they rounded the bend. The butterflies in my stomach started to flutter again and I turned in a panic to my husband. I searched his face for fear. If he was afraid he did not show it. He said to the empty cove, “They will be fine” and I nodded in agreement. It was only on the walk home I wondered if he was talking to himself. Fear followed me around as I waited for the boys to return, whispering doom into my ears. I kept it tame with the faith of my newfound wisdom. If I wanted them to grow, I had to let them go and explore their world. Anything else would be imprisonment.

The boys came home excited from their adventure. It was contagious and they talked over dinner of kayak trips. As they planned I allowed my mind to wander and I daydreamed the following scene.

It began with the rising sun playing on the water, sparking diamonds shimmering on blue. A red kayak nose is in foreground and beyond it is a great blue heron, looking like an old man, hunched over searching for his breakfast. The only sound is of moving water as it hits against the kayak, until the heron prehistoric screech fills the air, he is angry at being disturbed. The camera slowly zooms out and shows a young man in the kayak. He pauses only for a moment to watch the bird, with its magnificent wingspan, fly over him. As the camera zooms out further a second kayak comes into view, it is the man’s mother and they share a smile. Their paddles dip into the water in unison as they continue their journey. The camera continues to zooms out showing that they have traveled quite a distance from the small cove.  It then zooms out from somewhere above, showing the huge lake and how far the kayakers could go.

I allowed the image to fade and I returned to the dinner table. I joined the conversation with the question “Would anybody be willing to get up early and go with me?” I felt their approval.

One thought on “Why would you choose a puddle?”