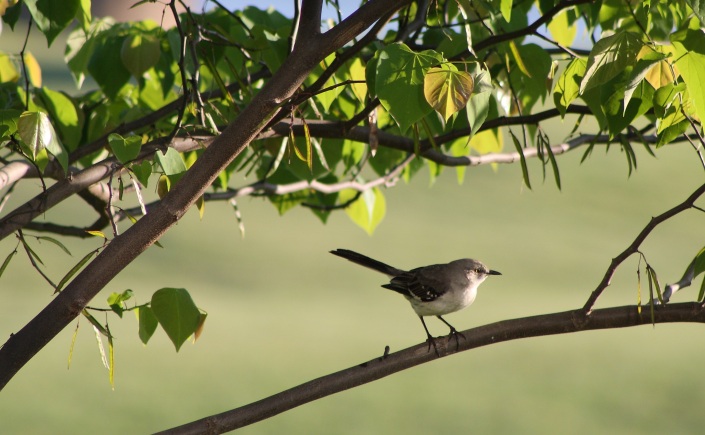 I’m having a hard time finding quiet time.  The mornings are too dark and cold.  It also has rained most of the week.  There was one beautiful day scrubbed cleaned by the rain.  I dropped everything to spend a few minutes outside in the sun and noticed new growth everywhere.  The garden has forgotten that winter is around the corner and comes alive after a much needed rain.  A beloved rose, once thought as dead now shows signs of new growth.  I rejoice in this beautiful moment, made even more complete by a flock of birds flying in unison in the cloudless sky.  They seem to dance on the wind, shifting and turning to music that only they could hear.  Were they rejoicing too?

The feeding frenzy at the bird feeder caught my attention.  A chickadee was waiting upside down for his turn at the feeder, until a big bully mocking-bird chased him away along with all the other diners.  This is his spot.  He is the king.  I watched him strut his stuff and listened to him sing his imitation of the other bird’s song.  I was impressed by his display.   I also noticed that I was the only one watching.  Mocking birds are solitary creatures.  The chickadee must have been hungry because he risked coming back, he seemed unafraid of the bird twice his size.  His determination was also impressive.

I wonder why the mocking-bird mocks.  Why would he call to the other birds only to chase them away?  It is not for the food, because as far as I can tell, he is not a seed-eater.  Does he call them to him so he can show them that he is the biggest and strongest?  “Look at me, I can sing your songs and I can force you out of my territory.  I am better than you all”.  It is hard to admire this bird and it’s arrogant ways.  I would rather watch the small chickadee, defeating incredible odds to fulfill his hunger.

My imagination takes flight and the bully mocking-bird takes on the image of people.  Those people who look for opportunities to make one feel inferior.  So insistent that they are far more special than you and that there is no room for “little people”.  You try to venture out to fulfill a desire to be good at something only to have it squashed by a “lime-light” stealer, the mocking birds of the world.  My family has been dealing with mocking birds all week.

Most mornings my family wakes up with an agenda to do something that matters and we go to bed feeling empty.  I can see their fatigue and disappointment.  The days become increasingly more difficult to start because of this tiredness.  We snooze the alarms and bicker with each other and our moods become heavy.    Except one day this week, my youngest and his rock band had the opportunity to perform for his school.  At 4:30 that morning my boy bounced out of bed for the required 6am sound check.  His excitement was contagious and I willingly drove him to school.  This same excitement was evident as he played for his peers.  It was an awesome thing to watch these young men, who have worked so hard for this moment.  This is what he hungers for.  When he came home that evening, the excitement had vanished.  It turns out that a few critics made it known that he and his band could have done better.   A few mocking birds trying to chase him away.  I need to help my boy become the chickadee, or his soul might starve.

I remember a time I allowed my soul to be fed.  I stepped out of hiding and allowed myself to write for the public.  I sat in front of a blank screen for hours fighting with myself.  I was starving and I had to do something.  The words eventually came to me.  I became lost in the process, almost hypnotic and it was there that I felt a stir deep within.  I started to believe in myself and I felt something start to grow.  Like a small plant unfurling from it’s seed.  It grew the more I wrote.  I felt it take root.  I remember it shocked me that I could feel that tiny twinge of self love.  I devoured the small crumb of what my soul had been lacking.  A foretaste of what I could feast upon.  I poured myself into that early work.  I spent hours upon hours exercising a creative muscle I did not know I had.   I gave a piece of myself to the public.  The group I presented it to, loved it.  They sang it’s praises and I felt admired.  It was a glorious feeling.  I wanted more, so I wrote more.  My writing evolved into something that surprised me.  A few people in my audience wanted me to write what they wanted to hear.  There soon was a conflict, when two different people wanted the same thing said in different ways.  They became mocking birds and they chased my creativity back into hiding   My soul was back to starving to death.

If I am not careful, the same thing could happen here in this adventure into the “blog” world.  It could also happen to my young musician.  We both are allured by the call of the public and by that feeling we get when we are admired.  A call like the call of a mocking-bird.  It fools us into thinking that it is one of us, then it changes it tune..  The lesson I must learn is how to discern the call.  I know we are all called to be whatever it is that God created us to be.  He put a passion within each of us, one that will feed our spiritual hunger.

I have no idea what will become of my writing, or if it becomes anything at all.  I only know that a seed has been planted and I am working the soil to allow it to grow.  I am tired of being hungry.  I am tired of being chased away from the feeder that God has placed before me.  I have to be bold and face the huge bird so I may be fed.  I want the same for my family.  I want them to face their mocking birds with determination.  I believe that this is where true joy can be found.  If we do not find joy in something, we will become the mocking birds of the world.  Alone and with no song of our own.